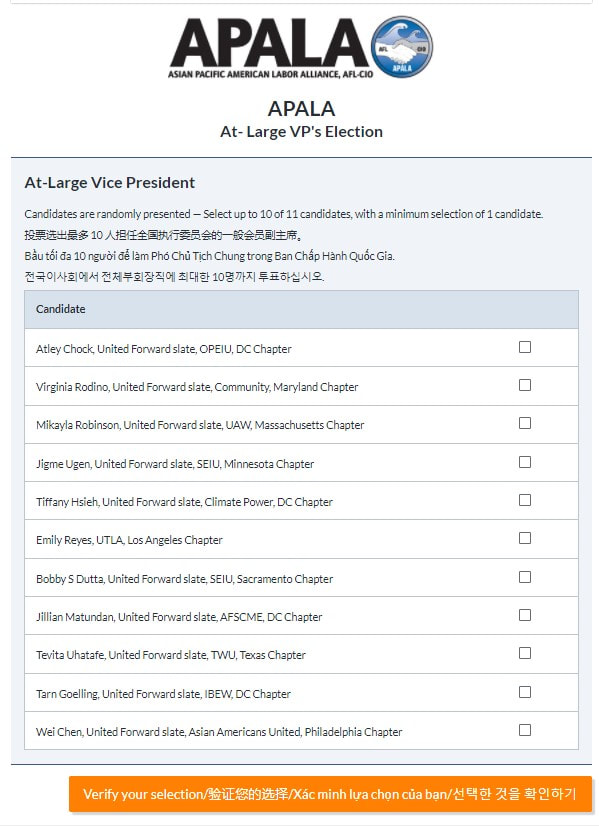 ​Below is everything you need as an APALA member to participate in APALA business, such as submitting resolutions, running for a National Executive Board position, voting, and more.

Please contact us at convention@apalanet.org if you have any questions.
What's Below:

According to the APALA Constitution:

That means the deadline is June 22, 2021 for
​Chapters and Unions must submit the names of their voting delegates on or before June 22nd. Please note that registering for Convention does not permit a delegate to vote. Only those delegates whose names have been submitted by their Chapter or Union as a voting delegate will be issued voting credentials.

If your Chapter or Union has not submitted your name as an approved voting delegate, you will not be eligible to vote. If you would like to be considered a delegate for your Chapter, contact your Chapter President. If you would like to be considered a delegate for your Union, or don’t know who your Chapter President is, contact us at convention@apalanet.org.
Convention Webinars
​WATCH Convention Business 101 Webinar PART 1
WATCH Convention Business 101 Webinar PART 2
Nominations Process
APALA members seeking to run for an At-Large Vice-President position on the National Executive Board or a National Executive Officer position at APALA Convention can submit their nominations ahead of time, or they can nominate themselves or another person off the floor during Convention Business. Candidates will need to state their union/organization and chapter affiliation in their nomination. Please submit nominations to Nominations Chair (sliu@usw.org) and APALA Executive Director (alvina@apalanet.org) by August 5, 2021 at 5pm PST. APALA staff will confirm that nominees have been a member in good standing at least 60 days before Convention on June 7, 2021.

Nominations for At-Large Vice Presidents will occur on Friday, August 6. The Nominations Chair will open the session and outline the rules, which are as follows:The pre-recorded video nominations follow the same time limit and order of speakers as listed above (nominator, second, nominee).
​Page Translations: